How to Read Resistor Color Codes

Resistors are color-coded for easy reading. Imagine how many blind technicians there would be otherwise. Here's the color code:

How to Read the Code 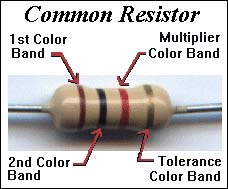 To determine the value of a given resistor look for the gold or silver tolerance band and rotate the resistor as in the photo on the left. (Tolerance band on the right-hand end of the colors -- refer to the tolerance chart below for exact values).

Look at the first color band and determine its color. This maybe difficult on small or oddly colored resistors. Now look at the chart and match the "first and second color band" color to the "digit it represents". Write down this number.

Now look at the second color band and match that color to the same chart. Write this number next to the first digit.

To pull it all together now, simply multiply the first two numbers (first number in the tens column, and the second number in the ones column) by the Multiplier.

Resistors are never the exact value that the color codes indicate. Therefore manufacturers place a tolerance color band on the resistor to tell you just how accurate this resistor is made. This the the band farthest on the right-hand end of the bands. It is simply a measurement of the imperfections.

Read the number as the '% Failure rate per 1000 hour' This is rated assuming full wattage being applied to the resistor. (To get better failure rates, resistors are typically specified to have twice the needed wattage dissipation that the circuit produces) 1% resistors have three bands to read digits to the left of the multiplier. They have a different temperature coefficient in order to provide the 1% tolerance.

A couple of examples:

Just a few common questions to help you out.

1) Which side of the resistor do I read from?

The Gold or Silver band is always set to the right, then you read from left to right. Sometimes there will be no tolerance band -- simply find the side that has a band closest to a lead and make that the first band.

2) Sometimes the colors are hard to make out. How do I make certain what the value of the resistor really is?

Occasionally the colors are jumbled or burnt off. The only way to read it is with a multi-meter across the leads

3) How do I remember this sequence of colors?

Remember the color codes with this sentence: