The Pacific Northwest Club Challenge was established in 1993 as an annual inter-club competition to promote greater contest participation by club members.

A trophy is awarded each year to the competing DX club whose members have attained the highest combined score, based on the following pre-arranged set of major contests:

View the latest scores -- May 23, 2017 (PDF file) Read about how the spreadsheet works (text file)
Members are asked to check the current scores. Report any errors or omissions to Jim VE7FO. 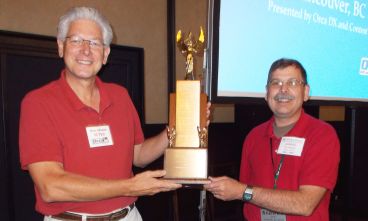 Orca DXCC and the PNW Cup

by Jim Smith VE7FO
Orca DXCC is now a participant in an inter-club contesting competition known as the PNW Challenge. I thought it would be useful for you to know how this competition works.

The following PNW Challenge introduction presented by Jim VE7FO at the first Orca meeting explains it all.

You will need:
A PowerPoint viewer A PDF viewer Google will tell you where to find them (free)
Depending on your web browser, the slideshow may run directly from the web site (this works in Internet Explorer, for example). If the PDF files don't open from within the slideshow, you can open them yourself.

BE SURE TO READ THE FIRST SLIDE, "HOW TO RUN THE SHOW" and follow the instructions. If you don't, none of it will make much sense.

If you have any problems running the show there are some suggestions built into it (Slides 2-6). If you still can't make it work drop me an e-mail.

If you find any errors, please let me know.

How to submit your PNW Cup scores

As the PNW Cup Coordinator for the Club, I'm the person who collects the members' points, fills in the spreadsheet where the Club's points are accumulated over the contest season and publishes it. I do this for both BCDXC and Orca DXCC.

When I was only handling the BCDX Club it was pretty simple. The members reported their scores to 3830 and I found them and published them. Some also e-mailed me their scores.

Now that I'm handling both BCDXC and Orca the 3830 method doesn't work anymore because I can't tell from 3830 where someone's points should go, particularly for members of both Clubs.

Here's what I've come up with. It sounds like a lot of unnecessary detail but it's needed in order to properly allocate the points to the various Clubs. The new reporting process will be used for CQ WW CW and ensuing contests.

The info I need is as follows.

I need your Call and raw score. This is the score submitted to the Contest Sponsor (if you submitted your score. For PNW purposes it doesn't matter if you didn't). I don't need QSOs, Mults or whatever, just the total points.

I need to know the call of the station where you operated (to make sure you were in the overall Club Region).

I need to know which Club(s) you want to allocate your points to so I can make sure they get there. While it might seem that obviously they go to your Club, the rules state that any member of any of the PNW Clubs can allocate her points to any of the clubs in any proportion she chooses. Also, there are a number of members who also belong to other PNW Clubs and may wish to allocate their points to the other club.

For example, I'll be allocating my points to the BCDXC for this contest season as a thank you gesture for all the help and mentoring I've received from the members. In my view, it would be nice for others with dual membership in Orca and BCDXC to think about maybe doing the same thing (or even split the points 50-50 between the two Clubs).

As above I need the Call and raw score of the reporting member.

I need to know the call of the station where the operation took place (to make sure you were in the overall Club Region and whether or not the station owner is a PNW member).

I need the calls of ALL the ops and which PNW club they belong to. If they don't belong to at least one put "None".

I need to know which Club(s) each PNW member op wants to allocate his points to.

Note that this also applies to members who operated at a non-member's multi-op. Just one report per operation please.

WHERE TO SEND THE SCORES

The Cup Coordinators for the various clubs don't usually enter scores until a little while after the contest submission deadline (because they only want to do it once). Once all the Clubs have entered their scores on the common spreadheet I pdf it and we all post it to our respective Club web sites. Members can then check to see how the Club is doing and if their scores have been entered correctly. 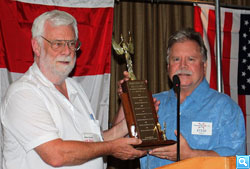 2010 Trophy Presentation
Jim Smith VE7FO presents the 2009-2010 PNW Club Challenge trophy to Brad Wallingford K7ZSD, accepting on behalf of the Willamette Valley DX Club. (Photo: VE7VR)
The PNW Club Challenge for 2009-2010 was won by the Willamette Valley DX Club (who also won the inaugural trophy back in 1993). The trophy was presented at the PNW DX Convention in Vancouver on July 31, 2010. Congratulations to the WVDXC!

Jim Smith VE7FO has prepared a summary of all the scores from 2004 through 2010 to illustrate whether or not the competition is, in fact, creating more contest activity in the overall club region.